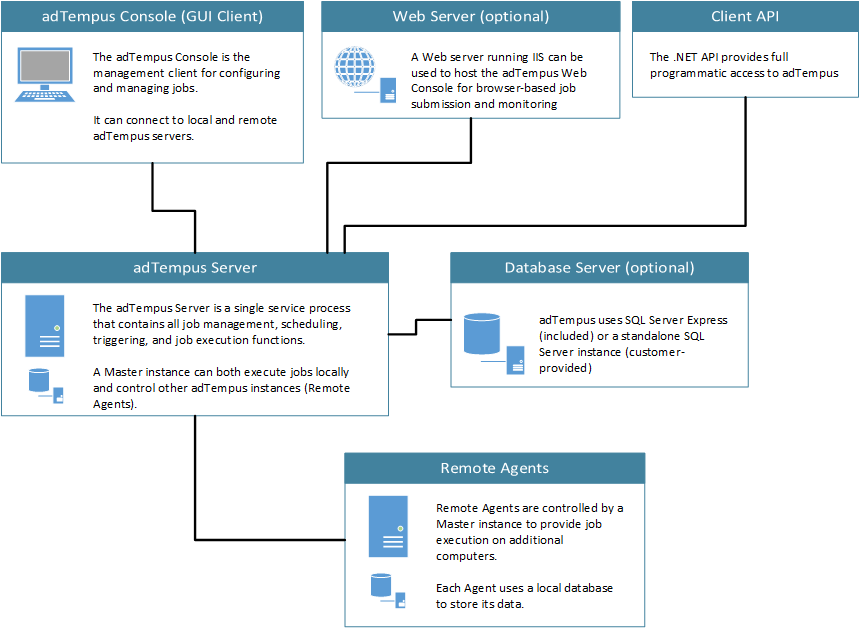 The adTempus server is the "engine" that does most of the work for. This is a single service process that is responsible for:

The adTempus Console is the primary client tool for adTempus, used to administer the adTempus server and to schedule and monitor jobs. This GUI application runs on any Windows computer and communicates with the Server using TCP/IP, so it can be run from any computer with a network connection to the server. This allows users to administer adTempus from their workstations or even their homes without using remote-access tools.

adTempus includes a command-line utility to execute "on demand" jobs. Use this utility to start jobs from batch files, desktop shortcuts, etc.

The Web Console can be hosted on a computer running IIS to provide Web-based access for job submission and monitoring.

adTempus does not use client-based licensing: you can have any number of client connections without requiring additional licenses.

adTempus uses a relational database for data storage. This database is accessible using any reporting tool that supports SQL databases, so you can build custom reports to extract information such as job statistics.

adTempus includes the Microsoft SQL Server 2012 Express database engine, which is adequate for most users. If you already have a full SQL Server instance, you can use that instead.

The Distributed Scheduling features of adTempus allow you to execute jobs on remote computers.